Tuesday, 24th October Dr Jonatan Kurzwelly, will give a lecture titled “A theory of social identities developed through people’s stories from Nueva Germania in Paraguay”. He will also inform about his future research in Namibia.

The lecture will be given in English on the 24th October and again in German on the 2nd of November 2017. Both will start at 19:00 hours in the Swakopmund Museum.

Located about 300 kilometres north of Asunción, the capital of Paraguay, Nueva Germania was established as a eugenic, racist, and anti-Semitic settlement at the end of the 19th century by Bernhard Förster and Elisabeth Nietzsche.

As such, it was represented in several journalistic accounts through the prism of a sensationalistic history, which are often seen as harmful and offensive by its current inhabitants.

Today in this rural community people of Paraguayan and German descent live in relative peace, with no big political or ideological aspirations. As an anthropologist, Kurzwelly will oppose the sensationalistic accounts of journalists, by presenting stories which were told by some of the Germaninos (inhabitants of Nueva Germania) in a collaborative research process.

These stories cover a wide variety of subjects, and offer many rich examples for analyses which relate to some of the long-standing debates in philosophy and anthropology. In his lecture Dr. Kurzwelly will reflect on what we can learn about social identities from people’s narratives and photographs. 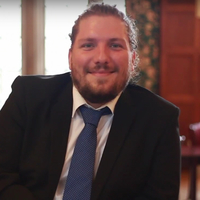 Dr Jonatan Kurzwelly was born as a child of artists from the two sides of the Iron Curtain in Europe. Despite his dual citizenship, he never felt German in Germany, nor Polish in Poland.

This personal question of identity developed in his academic interest in theories of social identities in general. His other academic interests include: sensory and visual anthropology, experimental and collaborative research methods, existential and phenomenological anthropology, and philosophy of social sciences. Jonatan recently obtained a PhD from the University of St Andrews. He is currently a post-doctoral research fellow at the University of the Free State, in South Africa.

Dr. Jonatan Kurzwelly is currently working on a book which will collect different people’s stories from Namibia. He is looking for potentially interested persons that would like to participate in this project. This includes life stories, accounts of important events, of problems, joys or achievements… – anything which is considered as important to tell by the authors. For more information contact the Scientific Society Swakopmund.

Begin typing your search term above and press enter to search. Press ESC to cancel.